For centuries, the Chaga mushroom has been used in European countries (as well as other countries across the globe) as a natural solution to several health conditions and ailments. So, we’re going to go over the mass amount Chaga mushroom benefits, how it is used, and the best Chaga mushroom products you can buy right now.

Since plenty of naturally-occurring plants are being used as nutritional supplements these days, we want to make sure that we’re clarifying that the Chaga mushroom is absolutely not a magic cure in any sense. Adding Chaga to your routine should improve your health, but definitely won’t fix major health concerns that you might have.

Keep in mind, these effects aren’t going to occur in everybody and the amount you consume per day will definitely have an impact on the results you see. Now that we’ve gotten that out of the way, let’s go over the benefits of Chaga mushrooms.

Since there haven’t been studies on humans concluding the same positive results, we don’t yet know if these results are similar in humans. What we do know, however, is that this can be monumental for this with blood sugar abnormalities and diabetes.

The nutritional value of Chaga mushroom alone is enough to explain the benefits of this fungus. Here’s a list of the ingredients that Chaga mushroom is rich in.

Obviously Chaga mushroom on its own isn’t enough to get you through the day, but supplementing your current diet with a little Chaga mushroom can greatly enhance your nutrition and overall health.

Obviously Chaga mushroom won’t stop your body’s aging, but adding Chaga to your skincare routine can help to appear much younger than your chronological age. That’s mostly due to the antioxidants found in the Chaga mushroom.

With a greater amount of antioxidants, your body’s cells, including your skin cells, will be less likely to damage and will actually improve in strength and durability. That means Chaga mushroom can improve your skin’s appearance and reduce wrinkling and sagging.

Plenty of ingredients and foods out there are cancer-fighting purely because they include antioxidants. Yes, Chaga mushroom does have antioxidants, which obviously are good for repairing your body’s cells and maintaining a healthy immune system.

What’s unique about Chaga mushroom is that it actually can help to kill cancer cells in the body. There actually appears to be some evidence that Chaga can prevent tumors from growing while also reducing inflammation within the body.

What makes Chaga mushroom unique is that it’s known to improve blood flow throughout the body. That means that adding Chaga mushroom to your daily routine has the potential to lower your blood pressure.

Yet, there’s also a possibility that Chaga mushroom can lower your cholesterol levels. With both lower cholesterol and lower blood pressure, your risk of developing heart disease or experiencing a heart attack are both significantly reduced.

How Chaga is Used

Like most supplements, there are plenty of different ways that you can consume Chaga mushroom in your routine. For the most part, there are three methods of consumption: Powder, chunks, and capsules. Let’s go over how each works.

Chaga powder is designed to be mixed with hot water and consumed just like tea. Since tea enters right into the digestive system and has immediate access to your blood vessels, you might notice quicker health benefits with Chaga tea/powder mixes. You might be getting around 2,000 milligrams of Chaga with every serving.

Chaga chunks sound a little gross, but you won’t be eating these! You’ll be brewing them like tea and then drinking the substance they create. This is somewhat like the powder, just in a more natural form (basically, right from the tree).

Chaga capsules are great because you don’t have to force yourself to drink a beverage that you don’t find all that appetizing. They’re loaded with a bit more Chaga than powders (sometimes around 2,500 milligrams) and also might include other beneficial ingredients that can impact other areas of your health.

There are a lot of Chaga mushroom products out there, but they all don’t have the same benefits. So, we compiled a list of the best Chaga products that you can buy online in order to see the positive health benefits. Here are our top choices. 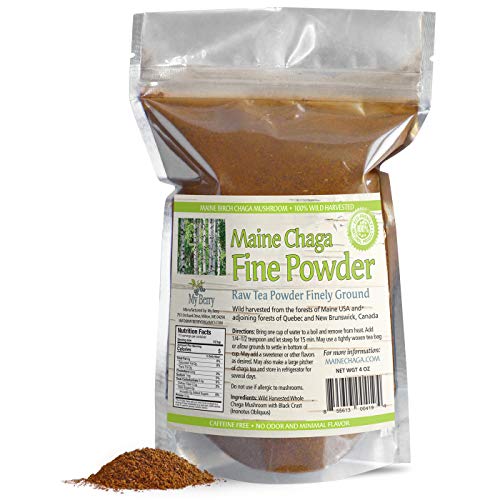 What we like most about this product is that you’re essentially buying in bulk without taking up your entire pantry. With every bag of this product, you’re getting anywhere between 300 and 600 servings of Chaga mushroom tea.

What we do want to point out as that, since this is similar to tea, no amount of mixing or soaking will remove all of the powder. That means you might end up drinking some of the grounds if you drink it too quickly (aka, not like tea).

Even though you might get some grounds, this tea is advertised as not providing too much of a taste or smell. Though this tea is definitely easier to drink because of that, you might want to add your own sweetener to enhance the taste if you don’t enjoy plain drinks.

What’s most important is that this powder is all-natural, coming directly from the sides of the birch trees in Canadian and Maine forests. So, you know that you’re getting a pure product without any added chemicals or treatments. 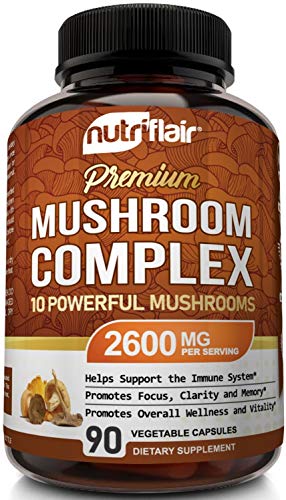 Who said Chaga is the only beneficial mushroom for your health? What’s great about this product is that it includes seven different mushrooms in a single blend, allowing you to get the most health benefits out of each. Here’s a look at the included mushrooms.

So, what does that blend of mushrooms mean for you? Well, this supplement is designed to boost heart health (i.e. Cholesterol and blood pressure) while also enhancing focus, creativity, and memory. Given the impressive mushroom blend, you might also experience a boost in energy, greater immune system functioning, and even a lower blood sugar level.

What’s most notable, however, is just how healthy this formula seems to be. Each capsule is considered gluten-free, vegan, and non-GMO. So, that means you know exactly what you’re putting in your body and the exact reason it’s in the product.

Each package comes with 90 all-natural capsules and provides about 2,500 milligrams per capsule. Instead of having to chug an 8 ounce glass of tea, you can just take one capsule every morning and see the same effects. 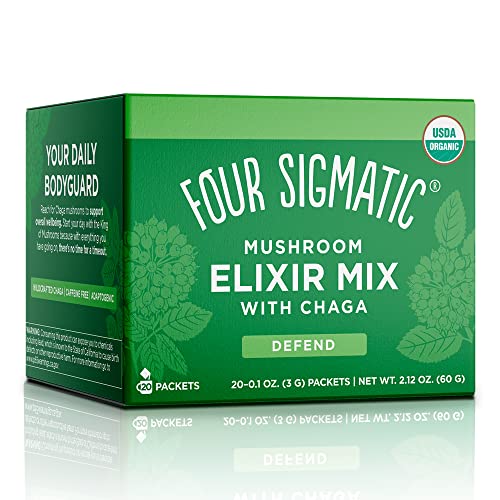 The Chaga Elixir from Four Sigmatic is an incredible way to get your Chaga in first thing in the morning. Each package comes with 20 servings, but what you’re going to like most is just how pure this product really is.

We want to point out that this Elixir is sugar-free, caffeine-free, completely organic, and vegan. Given these factors, you can be sure that you’ll be getting the most out of your Chaga without flooding your body with any harmful toxins or chemicals.

What’s great about this product is the focus on the added antioxidants (found in Chaga). This product is advertised as being able to boost your immune system while also enhancing the appearance of your skin, hair, and nails.

All you need to do is take some of this all-natural Chaga and mix it with a little hot water. If you’re feeling daring, you can even try mixing it into your coffee, smoothie, or basically any other beverage out there. While you’re shopping on Four Sigmatic, we’ve also highlighted their Lion’s Mane Coffee recommended by Tim Ferriss. 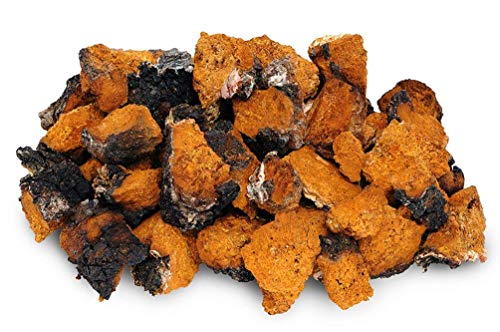 If you really like all-natural, then you can’t go wrong with just buying pure Chaga chunks straight off the tree (and packaged, of course). Each of these packages comes with about 4 ounces of small Chaga chunks, ready to brew about 240 servings of Chaga tea.

What’s great is that these chunks are absolutely ready to brew upon arrival. All you have to do is add some chunks to water, let it sit for several hours, and then drink it. You can also free the chunks between brewings and use them again.

Most important, however, is just how pure this Chaga is. It’s caffeine-free and completely organic. Better yet, it comes straight from the birch trees of the Canadian forests.

Whether you’re trying to increase your mental performance, physical performance, or longevity, Chaga mushrooms have numerous benefits to aid in your biohacking and wellness journey.