Are you a tea drinker? Is your cabinet full of tea types and flavors? Perhaps you’re looking to try something new, or you’re just curious as to exactly what chai green tea is.

Here, we’ll tell you all about the various components of chai green tea, its numerous benefits, brands that sell it, and some interesting background information.

Trip To The Past

Let’s go back to around 2750 BC. We’re looking at this mythical Chinese Emperor. His name was Shen Nung. Legend says the Emperor was resting under this tree, his servants boiling some water, when these leaves blew off the tree and into the pot.

It’s important to know that Shen was a fan of herbology, perhaps too much of a fan. He had tasted over 365 herbs before eventually dying from a toxic overdose.

To no surprise, when the leaves fell into the pot, he tasted them. Finding the result delicious, Shen further experimented and discovered medicinal properties to the herb. For its benefits, he urged the Chinese to cultivate this plant, becoming known as the Legendary Father of Tea.

Some may think that chai means tea, and in a way, it does. Before we look at the curious combination that is chai green tea, let’s first look at what chai actually means.

The word ‘chai’ means ‘tea’, but in Hindi. However, back in the day, Indian tea was very different from the tea we’re used to drinking.

Over 5000 years ago, Indians used to combine and boil a mixture of spices such as cinnamon, ginger, cardamom, black peppercorns, and cloves. They used these spices for Ayurveda, which is a set of natural medical remedies native to India.

When tea leaves were discovered in China and made their way to India, chai became a combination of tea, milk, and sweeteners. Masala chai adds spices to the mix.

Chai is usually made with black tea, but we’re looking at chai green tea.

It is safe to say that both black and green tea come from the same plant, the camellia sinensis. The difference is in the way they are harvested and processed.

Black tea is made by allowing the tea leaves to completely wither and oxidize until they are brown. Oxidation occurs here when the leaves absorb oxygen to the point where they wilt and dry out.

Green tea is left to oxidize very briefly, then is quickly moved to steaming. As such, green tea is less rich and bitter than black tea. The way it is processed also preserves its green color.

What is Chai Green Tea?

Chai green tea is basically chai, but with green tea instead of black tea.

The green tea in chai can either be as leaves or bags, or matcha powder. Matcha powder is specially cultivated and processed, finely ground green tea leaves. The powder offers a more concentrated dosage of tea.

The chai can either be water or milk-based. Milk-based chai is called a chai latte, and it is served better with matcha green tea powder.

Spices and herbs can vary from cinnamon, anise, ginger, honey, vanilla, black peppercorn, nutmeg, cardamom, and much more, depending on the recipe you follow or product you buy. You can add sweeteners to your taste.

Because of the rich combination of ingredients in chai green tea, you can probably already tell it has many health benefits. Let’s break it down.

Green tea alone has numerous advantages. It contains a group of catechins that have biological activity, such as anti-inflammatory, antioxidant, and antiproliferative properties. Allll of which assist in the prevention and treatment of numerous kinds of diseases.

It goes without saying that milk is very medically beneficial.

Milk is rich in calcium, the main component of bones, and vitamin d. Vitamin D is essential for building and sustaining bones. This is because calcium can only be absorbed by our bodies through vitamin D.

Each of the numerous herbs and spices added to chai green tea has its own advantageous qualities.

The list goes on according to the kind of ingredients present in chai green tea.

First, we’re going to look at is chai green tea by Stash. Stash is a famous American tea company.

The herbs and spices added include cinnamon, whole cloves, cardamom, ginger root & sarsaparilla. You can drink it hot or iced, as well as unsweetened, or sweetened with sugar, honey, or milk. 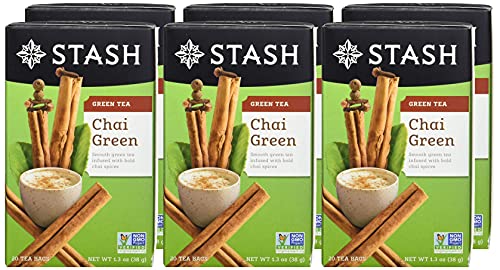 Second, we have the tortoise chai green tea by David Rio San Francisco. This company specializes in chai! They sell dozens of chai products, all with different ingredients and flavors.

This tea is rich in ingredients and flavor. It contains cane sugar, non-dairy creamer, honey granules, green tea matcha powder, and a natural spice blend. This product can also be mixed with hot water, or milk for a green tea chai latte. 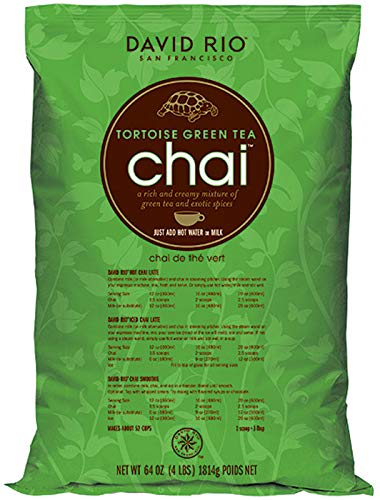 The third green tea product is brought to us by Uncle Lee. This is a well-known, North American tea company.

Finally, we have the coconut chai green tea product by TerraVita. They specialize in healthy herbal products.

Their chai includes a mixture of coconut, cinnamon, and ginger. The coconut aroma and taste are dominant and very enjoyable. 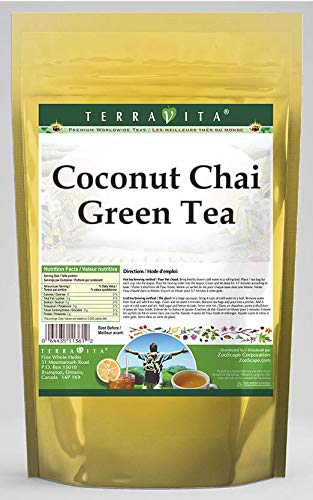 Chai green tea is a very unique drink. Not only does it combine green tea and beneficial herbs, but also spices and milk. It can sound strange, but aren’t you itching to try some? There are endless possibilities for the kind of herbs or spices you can try together or separately.

It’s a fun Indian/Chinese cultural adventure that you, as a devoted tea-drinker, owe it to yourself to try!